Home Is Where the Heart Is

When we were informed about the topic the English project was going to be about, I immediately thought about interviewing my American friend, Gracie. Gracie is currently 16 years old and lives in Robins, IA. She has moved around quite a lot already, which is why I was of the opinion that conducting an interview about her perception of home would be very interesting.
I asked her a handful of questions and whilst she gave different answers on each of them, it was clear what the core message behind them was: to her, family is home.
Based on her given answers, I decided to write a short story based on both personal as well as Gracie’s experience and opinion regarding the topic “home”.
With that being said, enjoy

When she first left her home, she felt lost. Leaving the place that she had grown up in – she was frightened. She worried that all the core memories would soon fade into sheer oblivion. Her first day of school, she knew that she did not belong. That she was not supposed to be where she was.
She missed her home. She missed the places she would go to whenever she felt sad or happy. She missed her house and the creaking of the floorboards that you could hear if you stepped on them in a specific way. She missed the fact that the basement was leaky and that, sometimes in the depths of winter, bats could be found in the far right corner, finding refuge from the freezing temperatures. She missed the feeling of belonging. She missed her home.
Over the years of living in the, still, foreign place, her only form of escape was reading. Being able to dive into another world and become a different person was exactly what she needed. However, she soon realised that this form of escapism was dangerous as she became detached with reality. She stopped reading and felt more alone than ever before. As more time passed but the feeling of loneliness did not, she resorted to, what she believed, her last option: consulting a loved one. Whilst talking about her feelings with her beloved mother, she came to realise that it was not only her who felt this way. Her entire family did. A family meeting was held and, as a result, a movie-night was introduced that was to take place on every Friday. Whilst it took some time for her to become familiar with this new arrangement, she soon found herself looking forward to these movie-nights and dreaded the moment they were to end. The fondness she felt whenever she sat down on the gray leather sofa, right in between her siblings and surrounded by other family members, was unexplainable. For the first time in a while, she felt like she belonged.
Once Spring break arrived, her parents called for a family gathering. When they were all assembled, her father announced that he had gotten a new job opportunity and that they would soon be moving to Germany. Unable to fathom the aforementioned, she did not know what to feel. She had just barely started to grow accustomed to her new environment and now she was going to leave again? Not only was she moving, but going to an entirely different continent at that. She looked at her siblings. They looked at her. It was at that moment that she noticed that not only she was having this internal conflict. She was not the only one who would struggle to adapt to their new conditions. She was not facing this alone. Drawing this conclusion, she started to smile at them. Surprisingly, they smiled back. Suddenly, she understood. She would not be leaving her home this time but rather, taking it with her.
She no longer felt lonely, for she finally comprehended: family is home.

What is home to you?

I interviewed my 23 year old cousin Annebel and asked her what home is to her. She currently lives in Minneapolis, Minnesota. Annebel just graduated from Rochester Community and Technical College.
Me and her don‘t talk much but we certainly share similar opinions regarding the topic “home“.
In order for Annebel to feel at home, she needs a support system around her. People who know her and have been through the same experiences as her in order to understand her. Her support system is her family and friends. Additionally, she needs to feel secure and loved. Nevertheless, home doesn’t need to be a certain place such as the place you lay your head at night, because home can also be a feeling. And when she feels the feeling of home she feels happy and safe. She is able to be herself and she has people who support her all the way. However, Annebel knows that following up her definition of home which also includes being around the right people as a main point, sadly doesn’t apply to everyone. When Annebel is finally “at home” she feels a sense of relief because when you’re home you lack nothing.
Based on Annebel’s answers I created a poem to illustrate her position concerning my central question: “What is home to you?”

Home.
This is my home.
Not necessarily the place you lay
Rather somewhere all the bad goes away
A place you feel safe.
A place you feel loved.
A place you simply feel home.
A peace of mind.
Found in language or culture it mustn’t be a place
Yet wherever it may be
You can find grace
Someone who knows
Someone who understands
It could even be that one unexplainable dance
One thing’s for sure
Security can be found
It’s my happy place
It’s a relieving sound
For some even bad
But that just makes me glad
That I have home.
Somewhere that I am known.

What does home mean to people that constantly move?

Claudia, 46, from Thuringia, has been friends with my mother for over 25 years. She knew my dad even before he was in a relationship with my mom due to a job at a bar in Weimar.
She was born in Nordhausen and lived in Weimar until 2004. She moved to London because of a job opportunity, although she barely spoke any English. She lived there until 2011, as there was nothing for her in Germany to come back to after she and her boyfriend broke up. Eventually, she did come back to live in a small town near Munich after the company she worked for opened a branch in Germany, she then continued to move often with the company: she lived in Frankfurt for 2 years, in Hamburg until 2016 and from then on, she settled down in Berlin, where she still lives today.

Hello everyone!
I‘m Hasti and I created a video centred around the topics homeland and differences between countries. For that, I interviewed my cousin Diba, who lives in Iran, and we evaluated the differences of our views on homeland, although we share the same homeland, Iran.
We also talked about cultural differences and how our lives and our lifestyles differ from each other, living in two different continents. So, enjoy the video below!

I interviewed Diba. She lives in Tehran, Iran, and is 17 years old. Diba visits the 11th grade of a private school. Her hobby is ice skating.

In the interview, she said that home is, wherever her family is. She does connect home with Iran, since that’s where she lives at the moment. Diba loves winter, because the Yalda Night, her favourite holiday, takes place in December. She enjoys the thought of a rural and simple life close to nature, like forests and deserts.
The project I created is a picture, which tries to represent her feeling of home. Since she connects home to Iran, I tried to use the colours of the Iranian flag as a base – green, white and red. She likes winter, forests as well as rural areas, which is why I drew a rural winter scenery in a forest. Additionally, I drew a hut to create a place for living. Furthermore, I drew a lake. However, the scenery that the lake reflects isn’t the winter scenery but a desert. I chose to do so to show the contrast of her two favourite landscapes – forests and deserts.
Also, I wrote a poem to intensify the atmosphere that is created by the picture. 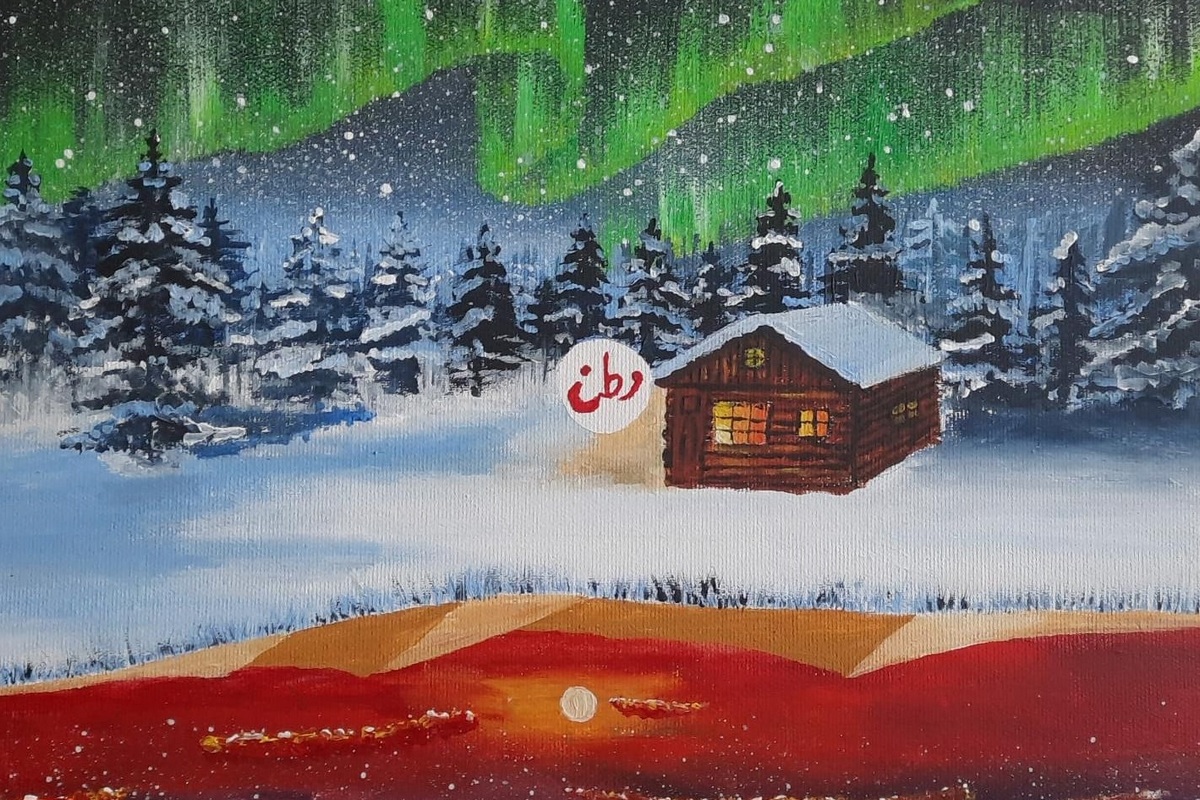